Join Nana America to Fight for Our Rights and Freedom

I felt like I was talking to Captain America’s grandma …. and you don’t say no to Nana America. I’m joining Julie and Mary in this fight. Let me know if you will too. ~ Greg Wohler, Owner of Valkyrie Combat Gun Store – 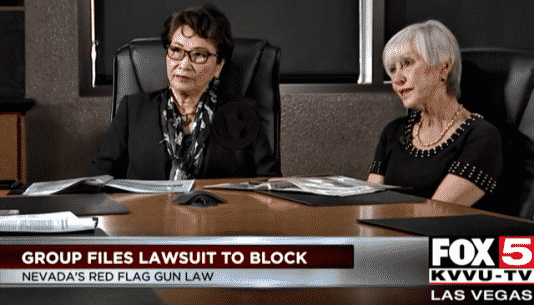 “These 2 badass golden girls singlehandedly started NevadansCan, testified before the State Assembly, and filed for an injunction against AB291, which has bought us some time. They did all of this because they believe in the 2nd Amendment, and because they’re more committed to it than we are. Everyone else gave up after AB291 passed. You, me, the NRA, EVERYONE. Everyone except for 2 tough Grandmas who are cooler than all of us.”

Greg Wohler, the owner of the Valkyrie Combat Gun Shop, the host of the Stop The Red Flag Law Rally being interviewed by Tina Trenner, Radio Show Host on KDWN 101.5FM 720AM of Las Vegas

Iris Stone, who not only received a certificate for almost $1000 in custom services from our shop, but also bought her very first AR! Congratulations Iris!

We are thankful for everyone’s generous support and donations during our first rally on January 19, 2020. The event helped generate one of the best fundraising weeks on record. If you missed the event and would like to support Nana America, visit our website, www.nevadanscan.com.